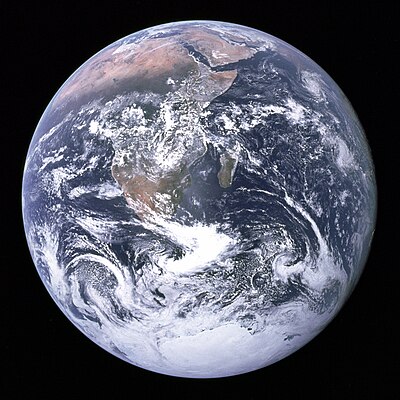 “Technology ("science of craft", from Greek τέχνη, techne, "art, skill, cunning of hand"; and -λογία, -logia) is the collection of techniques, skills, methods, and processes used in the production of goods or services or in the accomplishment of objectives, such as scientific investigation.”

This article aims to gather tech relevant for the well being of the populations and the planet. Technology can be used for good and evil this is a good reason to keep up-to-date on the problems and opportunities and good solutions. 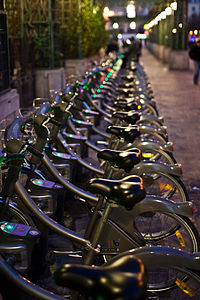 “Automation is the technology by which a process or procedure is performed with minimal human assistance.” 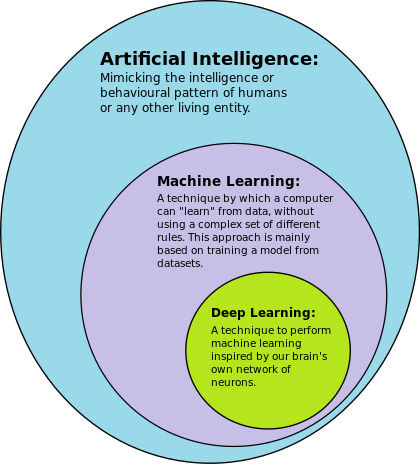 A w:Venn diagram that describes the relations of w:Artificial intelligence (AI), w:Machine learning (ML) and w:Deep learning (DL) according to some source.

Started with AI using IBM Watson at coursera.org][1st seen in 3] offered by IBM

See also List of free education for education resources into other subjects.

From private companies Gibson Dunn & Crutcher (gibsondunn.com) is a global law firm, founded in Los Angeles in 1890. They publish a quarterly legal update on "Artificial Intelligence and Autonomous Systems"

AI is can be divided to multiple subfields:

w:Neuromorphic engineering is also known as neuromorphic computing is a concept developed by w:Carver Mead, in the late 1980s, describing the use of w:very-large-scale integration (VLSI) systems containing electronic w:analog circuits to mimic neuro-biological architectures present in the nervous system. In recent times, the term neuromorphic has been used to describe analog, digital, mixed-mode analog/digital VLSI, and software systems that implement models of w:neural systems (for w:perception, w:motor control, or w:multisensory integration). (Adapted from Wikipedia)

Transcluded from article on SAFE Network

The SAFE Network, by MaidSafe Ltd (.net) from w:Ayr, w:Scotland, is a radically rethought approach to the networking and computational needs of people on planet Earth.

MaidSafe consists of the SAFE Network and the MaidSafe apps.

The development of the SAFE Network is spearheaded by MaidSafe.net Ltd, founded in 2006 by David Irvine, that has donated all it's w:patents and code to the human kind. A spin-off/sidekick is The MaidSafe Foundation.

The SAFE Network has it's internal w:cryptocurrency called SafeCoin. It is minable by providing computation and data transmission utilities (non-NOP CPU cycles and bandwidth x time x utilization rate) for the MaidSafe network and farmeable by providing major diskspace.

Currently it is unclear whether SafeCoin will be of value in the sense of being exchangeable with other crypto- and conventional currencies, but if the bookies and/or cryptocurrency afficionados aren't considering buying some SafeCoin to rig the answer of the bet to "Yes!" we'd be surprised.

There are various interesting ecological technologies being piloted. 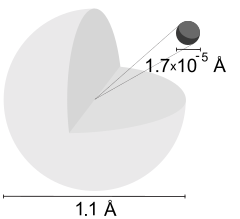 The size of a hydrogen atom, the lightest atom, consisting of a proton and an electron. According to Wikipedia hydrogen atom is roughly 1,1 Å. An Ångstrom is 10−10 m or a ten-billionth of a metre 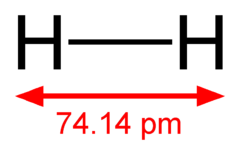 Hydrogen can be produced by from water by electrolysis even on an industrial scale, with #Hydrogen panels or from hydrocarbons by steam reforming.

Hydrogen fuel produced from (locally) harvested energy either by hydrogen panels or electrolysis plants can be considered and is being widely marketed as carbon-free, whereas steam reforming from other fuels causes carbon emissions.

“The Hydrogen economy is the use of hydrogen as a low carbon fuel, particularly for heating, hydrogen vehicles,[2] seasonal energy storage and long distance transport of energy.[3]”

~ Wikipedia on definition of hydrogen economy

HYBRIT is an abbreviation of HYdrogen BReakthrough Ironmaking Technology, where iron for steel making is not purified by a process called coking, but instead using massive amounts of hydrogen to purify it.

w:SSAB and partners are building a small-scale pilot production line in Luleå, Sweden, slated to be launched in 2020. 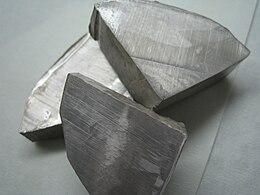 w:Chemical element with symbol w:Na and w:atomic number 11 is in abundant supply as it can be harvested from seawater.

“A supercapacitor is a high-capacity capacitor with a capacitance value much higher than other capacitors, but with lower voltage limits, that bridges the gap between electrolytic capacitors and rechargeable batteries. It typically stores 10 to 100 times more energy per unit volume or mass than electrolytic capacitors, can accept and deliver charge much faster than batteries, and tolerates many more charge and discharge cycles than rechargeable batteries.”

~ Wikipedia on definition of a supercapacitator

“Supercapacitors are used in applications requiring many rapid charge/discharge cycles, rather than long term compact energy storage — in automobiles, buses, trains, cranes and elevators, where they are used for regenerative braking, short-term energy storage, or burst-mode power delivery.”

~ Wikipedia on uses of supercapacitors

Spent hemp has been studied for use in electrical engineering.

CO2 capture can refer to capturing CO2 from an industrial process or just grabbing it from air.

Power-to-gas technologies are advancing. Power-to-gas involves energy losses in the conversion, but the power of gaseous energy that it is much cheaper to store than electricity, plus the distribution networks largely exist already.

Potential target fuels are hydrogen and methane. Hydrogen is being mixed into natural gas networks in Germany with no negative side-effects.

w:Methanation is the process of making methane from carbon oxides and hydrogen. Methane is a drop-in replacement for LNG and therefore could help us away from fossil dependence/capitalism. The price of proton-exchange electrolyzers has dropped by roughly 40 percent during the past decade the Scientific American Reports

Converting excess electricity from solar and wind farms to gases may be a very good idea as they can then readily be used to produce electricity during low-output times of solar and wind energy and because the systems to store the gas already exist.

Researchers from Purdue University have developed a technology entitled 'Use of Supercritical Water for the Liquefaction of Polypropylene into Oil' that works on polyolefin waste, the sort of plastic used for grocery bags, toys, and shrink wrap. This sort of plastic accounts for about 23% of plastic waste, according to researchers who describe the process in a paper published in Sustainable Chemistry and Engineering, a publication of the American Chemical Society. The new technique uses a process called hydrothermal liquefaction, in which very high temperatures melt pellets of polyolefin and then dissolve them in water. The by-products of this process are oil, gas, or solvents.[4]

Water demand of this new method is fraction of plant-based nutrition, let alone meats and it is slightly CO2 negative if the electricity is not from CO2 emitting power plants.

According to Australian research, if 2% dry matter of the Asparagopsis taxiformis seaweed is added to cattle fodder, the bovines' methane production falls to a tiny fraction (fall of 98.9%) in 72 hrs compared to cattle fed with traditional feed.

From seed to building material in less than a year is a reality in Kentucky as the first HempWood factory has opened. HempWood is said to have slightly better characteristics than oak.

Wikipedia's list of hemp products is not complete by a far shot.

GoMore.dk already made the "world first" of having p2p carsharing and carpooling in same app. They also offer leasing if you want to be the one sharing your ride. Hooray for Denmark.

They currently work in Denmark, Sweden, Norway, France and Spain.